Chris was a boarder in Otway during his years at Brentwood from 1949-58.  The picture below shows Chris with the Duke of Edinburgh at the Celebration of the 400th Anniversary of the School. 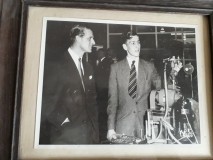 After a long and successful career in management and team-building in industry, Chris started his own consultancy in Personal Development.  Sport was important too and, as a successful cross-country runner during and after his school life, he became passionately interested in orienteering and was Chairman of the British Orienteering Federation. In recent years he returned to Brentwood to discuss the School's future involvement in the sport.  Travel was a passion too, and he and Gill went on many overseas cruises.  He also loved Folk Dancing and 'called' for his own clubs and for weddings.

He lived for many years in and around Ross-on-Wye where he served as President of the Vaga Probus Club - coincidentally the third Old Brentwood to have done so, the others being Peter Chester (1946-55) and the late Ian Cast, FRCS, (also 1946-55).

Chris leaves his wife Gill, four children and four grandchildren who are carrying on his love of sport.